As part of our quarterly newsletters, we will be looking at how the Adesco Programmes are improving our carbon footprint. This issue focuses on the environmental benefits of using Adesco Treated Grains & Beans to replace dried grain and imported soya.

Based on our research with UCD, as well as feedback from our customers, we know that the energy requirement of processing and storing dried grain is at least 12 times that of Adesco Treated Grain on a per tonne stored basis. This can easily double for beans. But how does this translate into a corresponding reduction in environmental footprint?

Figure 1 shows a comparison between the carbon footprint of Adesco Treated Barley and that of dried barley for a range of fuel sources. The comparison includes all inputs from the time the grain arrives in the yard at harvest to when it leaves some 9 months later. 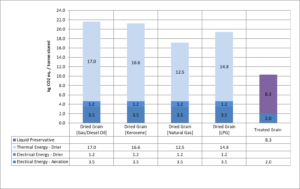 We can see that by avoiding the use of hydrocarbon fuels, Adesco Treated Grain has a much lower carbon footprint than dried grain regardless of the on-site heat source for the dryer. The majority of the carbon footprint associated with Adesco Treated Grain can be attributed to the production & transport of the MycoCurb itself as there is no thermal energy involved during processing. With the help of our partners, we will continue to reduce this figure over the next 12 – 24 months.

As mentioned earlier, the heat requirement when drying beans is typically double that of grain due to the physical characteristics of the beans. This results in an even greater disparity in terms of carbon footprint when compared with Adesco Treated Beans. Savings increase from 50% to approximately 70% depending on the heat source used.

In the next newsletter, we will look at the findings from our on-going commercial pig trial, where we replaced imported soya with Adesco Treated Beans. Soya typically accounts for 10-15% of the carbon footprint of pig production.

Initial results show significant potential to economically reduce the current dependency on soya imports. We will also look at the environmental benefits associated with our pig slurry to odourless organic fertiliser technology.

Keep up to date – subscrib e to get updates from us.

If you would like to talk to us about how we can help improve your feed quality and reduce costs please call or complete the form below.